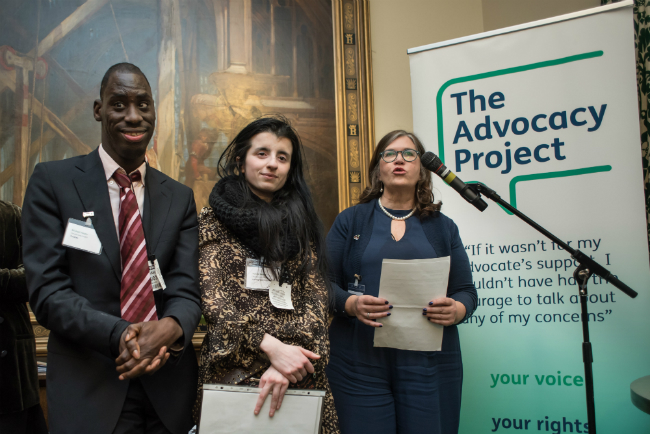 Fatima Begum and Michael Hagan both work for The Advocacy Project and have learning disabilities. They talked passionately about the difficulties they’ve faced finding paid work, and we screened a filmed interview. Many people were visibly moved by what they heard.

“It was truly inspiring … Fatima and Michael showed me just what a huge difference having a real paying job can have – even if it is for just a few hours a week. The pride and the joy in having real work positively shone out of them.” Rachael Varney, Political Advisor, Joint Public Issues Team

The benefits system is a complex beast which anyone would struggle navigating. But for people with learning disabilities, it can be especially difficult.

Michael Hagan works for The Advocacy Project advising on recruitment for other organisations. Due to the permitted earnings limit, he is only allowed to work two hours a week. He had his benefits stopped for five months because he went over the limit and worked three hours a week. Just a few extra hours of work led to a whole host of issues for Michael, for which he needed support from his mother to help get his benefits reinstated. He found this very difficult as leading an independent life is very important to him.

As an employer, we would like to pay the London living wage. Our staff tell us they can’t accept this as it would affect their benefits or mean they’d have to work fewer hours.

Supporting us to take this forward

We’ve had many messages of support from MPs, councillors and community organisations. Richard Graham MP, member of the Work and Pensions Select Committee, says:

People with learning disabilities tell us work is a really important element of their lives. It builds confidence and self esteem. With the right support, they can add value to the workplace.