Blog: from one service user to another 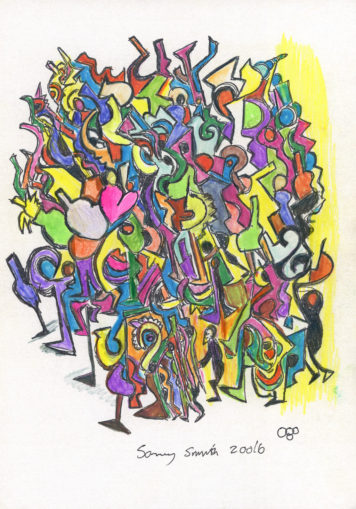 ‘The Christmas Party’ by Sandy.

As a charity that supports people with learning disabilities, mental health issues and dementia to speak up about the services they use, The Advocacy Project places service users’ voices and co-production at the heart of its work.

As The Advocacy Project is shaped by those we work with, we felt the design of the cards needed to come from the very same people — as an act of solidarity. People with mental health issues, learning disabilities and dementia, created their own original artwork for the cards.

This project has spurred positive action among our service users, who have been able to deliver a piece of work that they know will benefit other service users, based on their own experiences.

What the people we work with think about Christmas …

Jill and Sandy, who have been married for 23 years and have learning disabilities, love painting and drawing. They’ve spent a large part of their life trying to convince people, including their art teachers, they are capable of achieving their aspirations.

“Christmas is about giving and the cards will give a little joy to other people during the festive period.”

One of the other seven artists, who was in a mental health ward for a prolonged period of time, describes herself as one of the “lucky ones”, as her daughter would come and visit her in hospital.

Now in recovery and volunteering with The Advocacy Project, Giorgina told us that Christmas can be a really difficult time of year for those in mental health wards. She said that the most important thing is “having people around you that care” and that “it’s the little things that make the biggest difference”.

Jasmine, aged 16, who volunteers with The Advocacy Project during her school holidays, also produced a piece of artwork for the cards. She says:

“The Christmas card appeal will show people in care homes and inpatient wards that other people are thinking and care about them.”

How we sold and donated our cards

Working together, we have also been able to increase awareness about issues of isolation among the general public and health professionals. The cards are being sold to members of the public to cover the cost of producing and sending them to people in mental health inpatient wards in three London hospitals in Westminster and Kensington & Chelsea, as well as care homes in Westminster.

This blog by Ali Wright, Deputy Chief Executive Officer at The Advocacy Project, was originally posted on The Social Care Institute for Excellence‘s (SCIE) coproductionweek blogspot site on 20/12/16. The blog post can be accessed here.