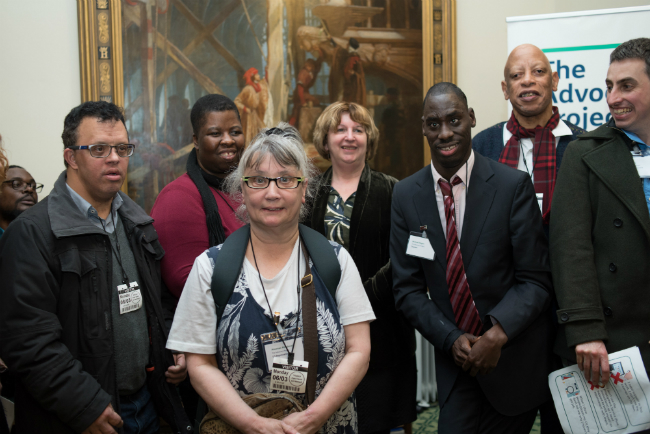 There are 1.5 million people in the UK who have a learning disability and only 6% of them are in work. Many want to work but the barriers they face, from negative attitudes to accessibility issues, mean they miss out on a job that they really want. This needs to change.

On 6 March 2017 Karen Buck MP hosted a Parliamentary Reception for The Advocacy Project to highlight the challenges and obstacles people with learning disabilities face in accessing work opportunities and to create discussion around how to unlock these restrictions.

Voices from the participants

Karen, Labour MP for Regents Park and Kensington North, welcomed everyone and said that we shouldn’t ignore the recent figures released by the Health and Social Care Information Centre that employment for people with disabilities has fallen from 7.1% in 2011 – 2012 to just 5.8% in 2015 – 2016. She urged everyone at the event to champion the rights of those with learning disabilities to access the work opportunities to which they are entitled (and also desire). Karen said:

“We can’t always get the change that we want without fighting for it.”

Fatima, who has a learning disability and who is employed by The Advocacy Project, spoke about how she spent 12 years at college to obtain her qualifications in maths, IT and English. She is passionate about fashion and her dream job is to work in a clothing shop. Despite her efforts and countless job applications, she hasn’t been able to secure paid employment in her dream role however she very much enjoys working for The Advocacy Project and said:

Service  User Trustee of The Advocacy Project, Michael is passionate about the theatre and performing. He spoke about his struggle to find work in his dream role so in 2008 he set up, with friends, a business called Crazie Productions, which aims to get more disabled people working in the media. Michael has been involved with the charity for six years and is paid to help local authorities in the recruitment of staff. Due to the permitted earnings limit, Michael is only allowed to work two hours a week and he told how he had his benefits stopped for five months because he had gone over the limit and was working three hours a week. Just a few extra hours of work led to a whole host of issues for Michael, for which he needed support from his mother to help get his benefits reinstated.   He found this very difficult as leading an independent life is very important to him.

“The benefits system, for example, is a complex beast which anyone would struggle navigating. But for people with learning disabilities, it can be especially difficult. The Department for Work and Pensions and Job Centres need to have a greater awareness of learning disabilities to help individuals access the right advice and support.”

The Advocacy Project employs 40 people with learning disabilities and pays them the minimum wage.  Given the potential impact on their benefits and care packages, they chose to earn a maximum of £20 a week. Last summer the charity consulted with them on moving from paying the minimum wage to the Living Wage as the charity wished to become a Living Wage employer.

“The outcome was a resounding “no”.  Our staff with learning disabilities didn’t want to be paid any more as they didn’t want to reduce their hours and they were concerned about getting in to trouble with the Department for Work and Pensions and having their benefits stopped.  There was real fear and concern.”

Those who were unable to attend left messages of support, such as Matthew, Deputy Mayor for Social Integration, Social Mobility and Community Engagement who wrote:

“One of the Mayor’s key areas of focus is equality. That means allowing all Londoners to have access to the great opportunities this city has to offer and to enable each of us to fulfil our goals. As Deputy Mayor of London for Social Integration, Social Mobility and Community Engagement, I’m keen to support this initiative and explore how we can remove the challenges facing people with learning disabilities in relation to work and pay.” All attendees were encouraged to add their own messages of support to the wall of messages, which were displayed at the event.

Rachael, Political Adviser for the Methodist Church, was moved by listening to Michael and Fatima’s stories and said:

“It was truly inspiring to attend The Advocacy Project’s parliamentary reception focusing on learning disabilities and the workplace. Fatima and Michael showed me just what a huge difference having a real paying job can have – even if it is for just a few hours a week. The pride and the joy in having real work positively shone out of them”.

“The benefit system needs to support people like Fatima and Michael and ensure that as they take risks and try to progress in work that they have enough to live on. It is so frustrating that instead it puts obstacles in their way – that must change.”

Pictures from the parliamentary reception

Messages of support for #UnlockingRestrictions